Monday night, my friends and I threw a big Gatsby/Roaring 20s themed dinner party. We had a blast! We girls shopped all day and then cooked dinner–even in our fancy dresses! Actually not that fancy, most of them are from Goodwill. Figures.

We mostly stuck to food that was significant to the novel–Daisy’s Mint Juleps, mashed potatoes + string beans, lemon cake. But the boys wanted steak, so we also had kebabs.

We set up in the lower level of my backyard. Later we realized we set up under our satellite dish. Classy, right?

We attempted to play badminton…

We took lots of pictures (more to come)…

(Excuse my friend’s face on the far left…)

When I woke up Monday, it said 40% chance of rain from 3pm till midnight. We also had an extremely limited budget. But thankfully, neither of those ended up being a problem! We used as much stuff as we could find in our own houses (or in those of the old ladies we know) to save money and ended up spending less that $50 on food! Most of our dresses are from Goodwill and accessories were ours or our grandmothers. It didn’t rain, other than a brief smattering before dinner. Overall, it was a smashing success!

Have you ever hosting a dinner party? What are your tips to make a party a success? 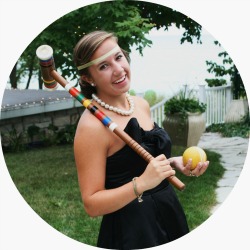 Sup everyone. I'm Allie and I'm pretty awesome. I'm a southern transplant from chilly Minnesota. In no particular order, I like folk music (+other genres), whale sharks, dinosaurs, jellyfish, dry humor, the outdoors and science of all kinds. Call Me Sassafras is a celebration of me being me and you being you. If you're new here, start here with some of my most popular posts.